New York City has sooo many people. Actually, about 1 in every 38 Americans live in the city. The city was originally named New Amsterdam by the Dutch settlers who came in the 1620s. There are lots of places to visit, including the Statue of Liberty and Ellis Island (where European immigrants entered the US). I tried ice skating at Rockefeller Center and saw a play in the theater district on Broadway. I even went to Wall Street where the big financial companies and the New York Stock Exchange is located! I rode in a subway deep underground, and visited each of the five boroughs – Queens, Bronx, Brooklyn, Staten Island and Manhattan. New Yorkers are fond of talking and love to tell stories. They talk loudly, quickly and interrupt each other. It was all very exciting, but now I am ready for a cat nap! Purrs, Gulliver

One mouse, two mice; one moose, two ….moose! Neither mooses nor meese are correct; moose is a Native American word which has no plural.  Moose means “twig eater”, which describes what they eat – plants, leaves, pine cones, buds and bark from trees. They are big animals – 5 to 6 ½ feet from ground to shoulder, (not including head and antlers). Their antlers can grow up to 6 feet wide and weigh 50-60 pounds. Moose like the cold weather, and have wide hooves which act like snowshoes in the wintertime. Moose are strong swimmers and can swim up to 2 hours without a break, or 6 mph and as far as 12.4 miles. A moose’s front legs are longer than its back legs. This helps the moose more easily jump over things lying in its path.  Purrs, Gulliver

How much do you weigh?  Male elk grow a new set of antlers every year, starting in the spring.  The antlers can grow up to 1 inch a day, and weigh 40 pounds before they fall off. I get a headache just thinking of all that weight on the head!   Most of us use our mouths to talk.  An elk will bark warnings and bugle, a cry which is loud and carries for miles. Yet when talking to friends close by, elk use their legs.  The bones in their ankles make popping noises so they know when another elk comes near. Elk represented strength, courage, and wisdom to Native Americans.

There is an expression “a man’s home is his castle”. Here is one man’s “castle” not too far from where I live in Salinas.  Hearst’s Castle was designed and built by California’s first female architect, Julia Morgan.  Mr. Hearst named the estate “La Cuesta Encantada” (“The Enchanted Hill”), but usually called it “the ranch”.   Hearst Castle was never completed because Mr. Hearst kept changing the plans and adding rooms, but in 1947 it had 56 bedrooms, 61 bathrooms, 19 sitting rooms, 127 acres of gardens, indoor and outdoor swimming pools, tennis courts, a movie theater, an airfield, and the world’s largest private zoo.  After Mr. Hearst died, the family donated the house to the State of California so many people could see the beautiful antiques and buildings. 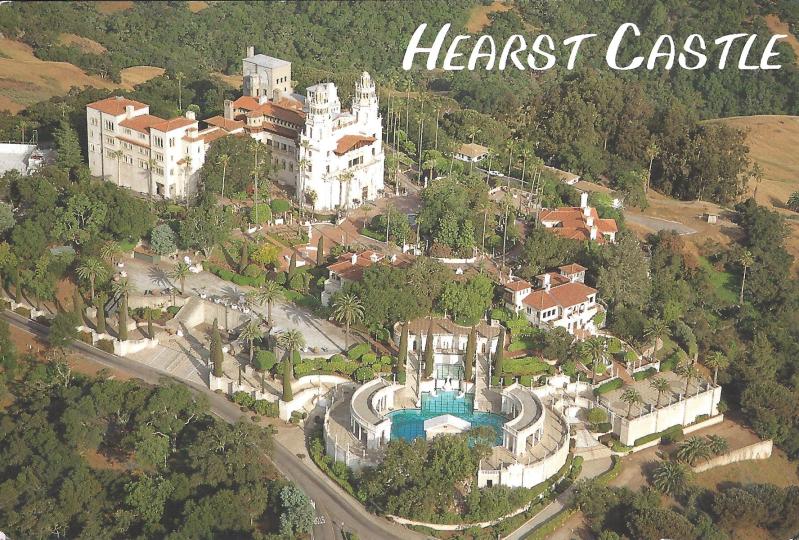 Thanks so much for the postcards for the kids! Everyone was so excited, reading theirs and everyone else’s, sharing the pictures, asking questions…it was a great morning. They were so excited they wanted to come to your house and visit, but I to;d them you were working and Gulliver was probably traveling.
Thanks again and let’s stay in touch!
Judy and the Dragons

I’ve always been a little camera shy, but mom caught me in a weak moment.  Happy Trails!